Important note: You should enable SSH agent forwarding with caution. When you set up agent forwarding, a socket file is created on the forwarding host, which is the mechanism by which the key can be forwarded to your destination. Another user on the system with the ability to modify files could potentially use this key to authenticate as you. See the SSH manual for more details.

In an earlier blog post, Ryan Holland, a Principal Partner Solutions Architect in AWS, showed how to secure access to multiple Amazon EC2 Windows instances running behind a Windows Remote Desktop Gateway acting as a bastion host. Ryan returns this week with a post that focuses on bastion hosts for Linux instances in private Amazon VPC subnets.

In this post, I’ll look at how to use SSH agent forwarding to allow administrators to securely connect to Linux instances in private Amazon VPC subnets. Using this configuration improves security because you don’t have to expose the management ports of your Linux instances to the Internet or to other subnets in your VPC.SSH and bastion servers

By default, Linux instances in EC2 use SSH key files for authentication instead of SSH usernames and passwords. Using key files can reduce the chance of somebody trying to guess the password to gain access to the instance. But using key pairs with a bastion host can present a challenge—connecting to instances in the private subnets requires a private key, but you should never store private keys on the bastion.

One solution is to use SSH agent forwarding (ssh-agent) on the client. This allows an administrator to connect from the bastion to another instance without storing the private key on the bastion. That’s the approach I’ll discuss in this post.

The first step in using SSH agent forwarding with EC2 instances is to configure a bastion in your VPC. We suggest that the instance you use for your bastion be purpose-built and that you use it only as a bastion and not for anything else. The bastion should also be set up with a security group that’s configured to listen only on the SSH port (TCP/22). For additional security, you can harden the instance further. It’s beyond the scope of this post to discuss hardening in detail, but doing so involves tasks like enabling SELinux, using a remote syslog server for logs, and configuring host-based intrusion detection. For more in-depth information, see OS Hardening Principles on the etutorials.org site.

Always remember the following when configuring your bastion:

Configuring ssh-agent on a Mac

For Mac users, ssh-agent is already installed as part of the OS. You can add your private keys to the keychain application by using the ssh-add command with the -K option and the .pem file for the key, as shown in the following example. The agent prompts you for your passphrase, if there is one, and stores the private key in memory and the passphrase in your keychain.

Adding the key to the agent lets you use SSH to connect to an instance without having to use the –i <keyfile> option when you connect. If you want to verify the keys available to ssh-agent, use the ssh-add command with the -L option. The agent displays the keys it has stored, as shown in the following example:

After the key is added to your keychain, you can connect to the bastion instance with SSH using the –A option. This option enables SSH agent forwarding and lets the local SSH agent respond to a public-key challenge when you use SSH to connect from the bastion to a target instance in your VPC.

For example, to connect to an instance in a private subnet, enter the following command to enable SSH agent forwarding using the bastion instance:

When you first connect to the instance, you should verify that the RSA key fingerprint that the bastion presents matches what is displayed in the instance’s console output. (For instructions on how to check the fingerprint, se the EC2 documentation).

After you’re connected to the bastion instance, use SSH to connect to a specific instance using a command like this:

Note that ssh-agent does not know which key it should use for a given SSH connection. Therefore, ssh-agent will sequentially try all the keys that are loaded in the agent. Because instances terminate the connection after five failed connection attempts, make sure that the agent has five or fewer keys. Because each administrator should have only a single key, this is rarely a problem for most deployments. For details about how to manage the keys in ssh-agent, use the man ssh-agentcommand.

In Windows, you can connect to Linux VPC instances using PuTTY. To get SSH agent functionality, you can use Pageant, which is available from the PuTTY download page. When Pageant is installed, you can use the agent forwarding option in PuTTY to connect to instances in private subnets.

To use Pageant, you need to convert your private key from PEM format to PuTTY format using PuTTYGen (available from the PuTTY download page). In PuTTYGen, choose Conversions > Import Key and select your PEM-formatted private key. Enter a passphrase and then click Save private key, as shown in the following screenshot. Save the key as a .ppk file. 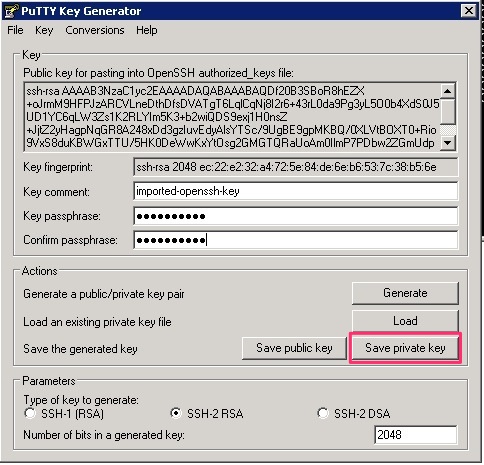 After you convert the private key, open Pageant, which runs as a Windows service. To import the PuTTY-formatted key into Pageant, double-click the Pageant icon in the notification area and then click Add Key. When you select the .ppk file, you’re prompted to enter the passphrase you chose when you converted the key, as shown in the following screenshot. 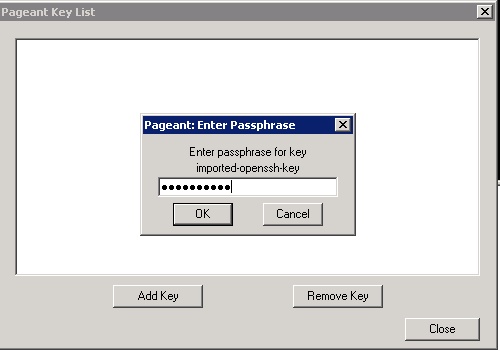 After you add the key, close the Pageant Key List window.

Finally, when you are configuring the connections for SSH in PuTTY, check the Allow agent forwarding box and leave the Private key file for authentication field empty.

When you use PuTTY to connect to the public IP address of your bastion, you will see that the Pageant PuTTY component provides the SSH key for authentication, as shown in the following screenshot. 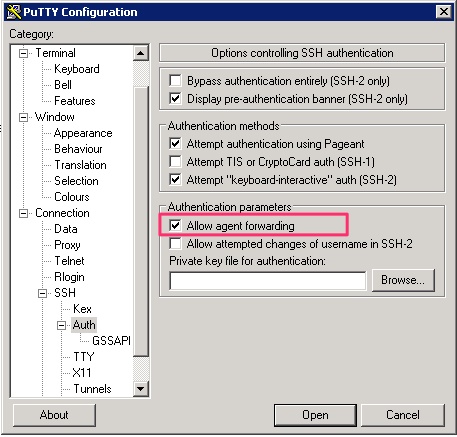 With agent forwarding enabled in the PuTTY configuration, you can connect from the bastion to any other instance in the VPC without having the SSH private key on the bastion. To connect to other instances, use the following command:

As long as the matching private key for the instance is loaded into Pageant, the connection will be successful, as shown in the following screenshot. 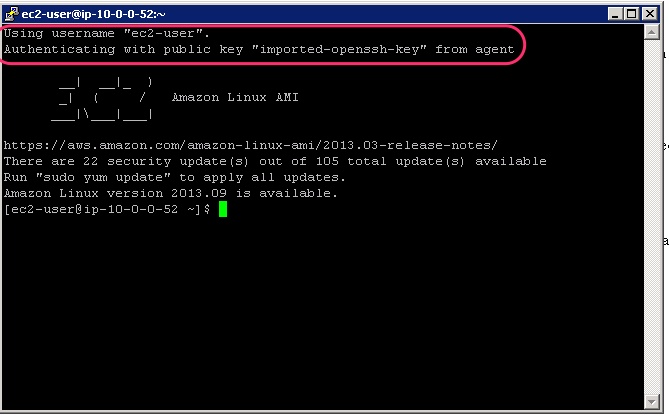 Using this information on how to configure bastions in front of Linux instances in a VPC, and with the earlier post about Windows instances and bastions, you now have additional tools  to help improve the security of your EC2 instances by closing off Internet access to their management ports.

If you’d like more information about SSH agent forwarding, there’s a good tutorial on the Unixwiz.net web site.

Let us know if these best practices work for your environment. We’re always looking to enhance our guidance to support as many of our customers’ use cases as possible.